Venus Williams Takes on the Man 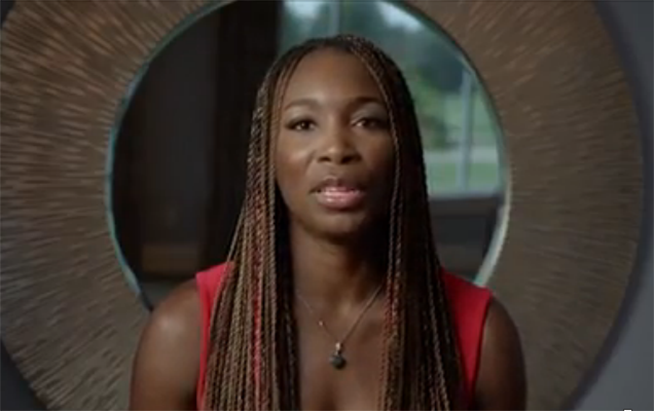 It started with a lobby to the British government. Then to UNESCO. There was a scathing op-ed in the Times of London. And ultimately, in 2007, success: Almost four decades after Billie Jean King demanded prize equity in women’s tennis at the U.S. open, Wimbledon did the same. Venus Williams became the first female champion to earn as much prize money as a man.

At the time, Venus Williams’ battle for prize equity in women’s tennis received little coverage. But a new documentary, set to premiere this week on ESPN, is sure to cement the Compton-born tennis star’s place in athletics history. “Venus VS” is the first of nine documentaries honoring women athletes that will air on ESPN over the next months, part of the network’s Nine for IX series that is directed by female filmmakers.

LeanIn.Org sat down with Ava DuVernay, the film’s director, to talk tennis, Title IX, and women and leadership.

Did you have a personal connection to Venus Williams? How did this film come about?  I’m a filmmaker with a specific focus on films centered on black women. When ESPN approached me about making something with them and asked me if I had any ideas, Venus immediately jumped to mind. I’m from Compton, and she’s from Compton. She’s always been a person I’ve watched and admired from afar.

What was she like to profile?  She was lovely, she was very open, she was very hands-off, which is something that any filmmaker in a documentary wants. The documentary is really a portrait of a champion as a totality, starting from Venus being an outsider in the game who was marginalized for where she lived, for [how] she played, for whether she grunted, the beads that she wore, her father, and not really being accepted.

Venus has spoken about how Billie Jean King has been an inspiration to her. How do you think attitudes toward women in sports have changed since King’s day? Society has come further, and equality is more talked about. It’s much different than the 1960s, when Billie Jean was tackling it and women had to have credit card applications co-signed by their husbands. But … just because laws and rules changed, it doesn’t mean hearts have changed.

Did you see that during production at all? One of the most startling things I found was the resistance by male athletes to participate. There’s only one male athlete, John McEnroe, who spoke on camera. We made over 50 interview requests to various men currently playing, high-profile former players in addition to the ATP (Association of Tennis Professionals) which is the male tour, all of which were refused or ignored. It really speaks to the fact that there’s really no interest in supporting or standing by the way that the women think. There’s a lot closed doors, snickering, pointing that “this is not fair”—the same old arguments that have been dismantled and disproven. The same arguments people throw out as to why women shouldn’t be paid equally are laid bare in this documentary and examined for what they are.

Have women athletes achieved parity? Will they?  There are many instances of [inequity] across professional sports, whether it be sports that don’t have a female equivalent (like football), or sports where the female equivalent is not as equally supported (some people would argue that that’s the case with the WNBA), or [instances] where girls in the suburbs have soccer balls and fields, but girls in the hood don’t. It’s not equal professionally or at the student level, but certainly there has been progress.

What can people take away from Venus’s story? This story about equality in the sports realm is one that reverberates through every corner of society that is dealing with equality issues. That’s one of the beautiful things about sports—it’s a microcosm. The battles these athletes face on the court, the field, mirror the kind of epic battles that people face in everyday life. So to imagine that a sport that’s being seen and consumed on the international stage in 2007, just five years ago, is still unequal—that’s an inequality that reverberates across different parts of society. And when that unfair kind of playing field is made right and made level, that also reverberates.

Do you think there’s a correlation between sports and leadership? It’s been published that a high percentage of women CEOs play organized sports, which I think is a lovely idea. I also think there’s something to be said for the spectator of women’s sports. I went to an all girls school and I was a spectator of women’s sports, because women’s sports were all that we had at that particular school. And there was something galvanizing about watching women conquer their battles and fight these battles on the court and on the field.

You became the first African-American woman to win the Best Director Prize at Sundance. Why do you think it’s important to have women directors? Why wouldn’t we have women directors? It’s important because we’re human beings with films to share, not for any particular social goals, other than the fact it’s right and that it should be. Why would we accept a society where we don’t have women telling our stories in the most powerful medium? There are amazing women making amazing films around the world, and I’m happy to consider them my sisters.