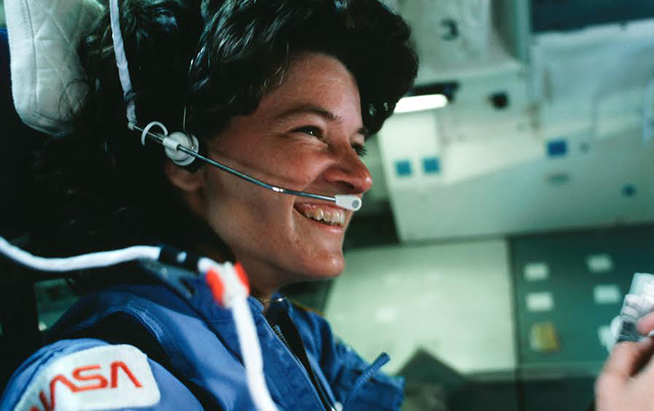 Physically, astronaut Sally Ride wasn’t the sort to lean in.  America’s first woman in space – who soared through the ultimate glass ceiling on the space shuttle Challenger in June 1983 – was upright and outwardly reserved, with a quiet, low voice.  Her assertiveness was something you felt, rather than saw, a determined and confident ability to do what she considered right and to bring everyone along with her.

But make no mistake:  Sally Ride leaned in instinctively, and never more than on the day that she changed her life forever.

As a child, she watched our earliest rockets shoot men into orbit, and then to the Moon, awed by the magic but unable to connect their bold adventures to her own southern California life.  NASA in those days was a macho male bastion of military pilots: no girls allowed, certainly not in the silver spacesuits of our heroes.  Sally later would put it wryly:  “I’ve been fascinated with space ever since those early telecasts,” she wrote, “but never really thought it would be possible for me to become an astronaut – my chances of getting certification as a test pilot appeared pretty slim then.  Going up in space didn’t look feasible, but studying it from the ground did.”

So she committed herself to physics, and then specialized in astrophysics. Sally envisioned her future in academia doing research and teaching.  And maybe one day winning the Nobel Prize.  Lack of confidence never hindered her upward trajectory.

Then one morning in 1977, while still a graduate student at Stanford University, she drifted into the student union before morning classes.  Over a cup of coffee and a cinnamon roll, she picked up a copy of the Stanford Daily and never got past the front page.  There, just above the fold, was a riveting headline:  NASA To Recruit Women.  Her future had just landed in her lap.

“I just had this ‘Wow!’ feeling,” Sally later said.  “I read through the list of requirements…and said to myself, ‘I could do that.’”  She ripped the article from the paper and went in search of stationery, immediately requesting an application from NASA.

It would take eight months until the mass of applicants – more than 8,000 people – was whittled down to 208 finalists; another four months after her interview to get the good news.  But when the phone call came on January 16, 1978, the normally reticent academic started jumping up and down.  “Hi!” she bubbled, long distance, to her best friend from high school. “This is your friendly local astronaut.”

Sally Ride’s life would never be the same.  After training for four years in NASA’s astronaut class of 1978 – the first selected specifically for the shuttle, with six women and thirty men – she was picked to be the first of the women to fly.  Some half a million people lined the beaches and the coast of Cape Canaveral to watch her launch. Millions more held their breath as they willed Challenger off the pad on TV screens around the world. It was a perfect mission, and Sally became a role model and a new hero for a new generation in a rapidly changing world.

She never stopped leaning in for the things she believed in: more and better science education for youngsters, especially girls; pay equity and fair treatment for female employees; laws and programs to protect the planet, whose fragility she saw first-hand through the space shuttle’s windows. Her ability to do all that – and to be heeded and respected – was, she knew, because of that famous first flight.

Sally understood completely what a privilege she’d been given.  But she also understood her own role in taking advantage of it. She was wise enough and nimble enough to know when to grab for the brass ring.  That is, to know when to lean in.