"This Is What I Want to Do with My Life"

By Howard Schultz and Rajiv Chandrasekaran on November 11, 2014. Share 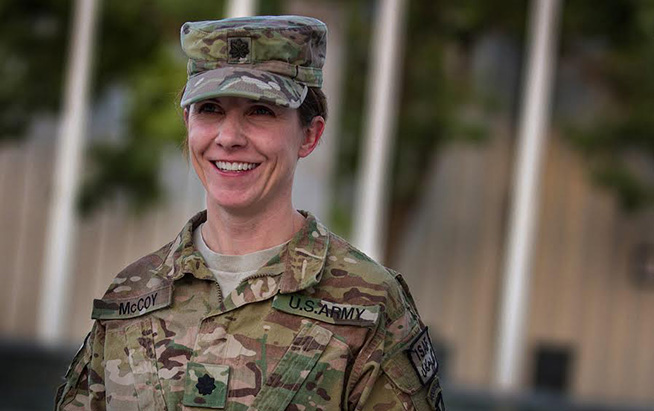 Excerpted from For Love of Country by Howard Schultz and Rajiv Chandrasekaran. Copyright © 2014 by Howard Schultz and Rajiv Chandrasekaran. Excerpted by permission of Knopf, a division of Random House LLC. All rights reserved. No part of this excerpt may be reproduced or reprinted without permission in writing from the publisher.

In 2002, when Kellie McCoy became the first female engineer officer to join the Army’s storied 307th Engineer Battalion, a former member of the unit wrote a message to one of her superiors that wound its way to her: “Ten thousand paratroopers are rolling over in their graves.”

At the time, some in the 307th, a contingent of parachute-qualified soldiers who are trained in demolition and construction under fire, expressed similar feelings to McCoy’s face. Though she was a captain, they refused to salute her as she walked through the motor pool in Fort Bragg, North Carolina. They’d stride past her naked on their way to the showers, some because they were simply ignoring her, others intent on provoking her. The following year, when the 307th headed to Iraq with the rest of the Eighty-Second Airborne Division as the war started, the battalion’s commander didn’t bring her. “I’ll go to hell before she gets an Eighty-Second combat action patch,” he told fellow officers.

Many of the military’s gender barriers had been lifted by then—the Air Force allowed women to fly combat aircraft, and the Navy permitted them on combat ships—but the Army and the Marine Corps still barred women from ground combat positions. That meant the 307th and other combat engineer units had few slots open to female soldiers and even fewer for female officers such as McCoy. Usually, they had to occupy administrative and support roles. Even when there were openings, combat commanders often shied from choosing women because they feared it would distract and disrupt the men they led. In the 1990s, several women had tried to join the 307th and had been rejected.

Army assignments are seldom a matter of choice. McCoy didn’t ask to join the 307th but was selected because her professional report cards exceeded every other candidate’s. She was incredulous about the opportunity—and apprehensive. She knew there would be a spotlight on her. “I’d have to do better just to be treated the same,” she said.

As a young girl, McCoy had never dreamed of joining the Army, let alone becoming a trailblazing female officer. The eldest of four siblings raised in St. Louis—her father was a paramedic, her mother a nurse—she didn’t love sports, long hikes, shooting, or many of the other passions that push kids toward the Army. She preferred to study and read.

She wanted to go to college, but she knew that her parents couldn’t afford to foot the bill. Even though she had been awarded a National Merit Scholarship, she would have to receive other assistance or take out the necessary loans. Then she happened to see a television show about a teenage girl who applies to the Air Force Academy.

Intrigued, she went to the library the next day and read all she could about service academies. She decided to apply to the Air Force’s and the Army’s and sought the required nominations from her congressman, Richard Gephardt. His office called and told her she had to choose between them. She had just devoured an epic history of West Point’s class of 1966, Rick Atkinson’s The Long Gray Line, and had concluded that the institution, which the book described as “a preserve of the nation’s values,” was the place she wanted to be.

She headed to West Point that fall. She didn’t sweat the stuff that trips up most cadets—the academic course load of her rigorous math major or even the rote memorization of school trivia, menus in the dining hall, and headlines from each day’s New York Times. But other things vexed her. She had no idea how to shine shoes. She fumbled through the obstacle course. She hated road marches. She had never touched a gun in her life. And on the first day, when the cadet in the red sash, to whom each “firstie” had to report, barked out an order, she stood flummoxed.

“Sir, I do not understand.”

He repeated his directive to depart.

“Sir, I do not understand.”

She worked to address her shortcomings, practicing the obstacle course and brushing up on Army lingo. She coxswained the women’s crew team, finding the perfect leadership role for a ninety-eight-pound teenager. At her commencement in 1996, her academic ranking was among the top 5 percent in her class. The following day, she married a classmate in the West Point chapel, and they soon moved to Germany, where he served as an armor officer and she as an engineer platoon commander.

Then she headed to Fort Bragg. Her first day of work there had been September 11, 2001. The attacks on New York and Washington gave her new purpose: She didn’t just want to oversee the assembly of bridges and buildings in safe, rear-echelon places; she needed to help in the theaters of war. But she also didn’t believe in bashing through the Army’s glass ceiling with a sledgehammer. She thought that ceiling needed to be dismantled methodically, one pane at a time.

She brushed off most of the mistreatment she experienced, chalking it up to ignorance and testosterone, not actual malice. When she did confront soldiers over their behavior toward her, she talked to them discreetly. Respect followed. Soon after the battalion returned from its first foray in Iraq—the one from which she had been excluded—she was promoted to command the battalion’s headquarters company.

Each day she spent at war, she fell a little more in love with the challenge of serving as an officer, overseeing the work of 180 soldiers, ensuring their safety, deciding how to allocate precious engineering resources, and participating in Iraq’s reconstruction. Halfway through her deployment, her future fell into place in her head.

This is what I want to do with my life, she thought.

McCoy’s true valor is evident in her career of service, still in its prime: grueling combat deployments, a refusal to accept the easy jobs, a series of trailblazing charges into terrain long off-limits to female soldiers. She is far from the only service member to have worked so tirelessly since September 11, 2001. Hundreds of others have spent more than four years in the war zones. But her enthusiasm to return to the battle zones again and again, in roles that included maintenance worker, company commander, and general’s aide, over a dozen years, in both Iraq and Afghanistan, placed her among a select few officers. For McCoy, the measure of her devotion to the nation involved more than fifteen hundred days at war, with nearly every waking hour of each day focused on leading, supporting, and mentoring her fellow soldiers. For more info, visit www.forloveofcountrybook.com