The Secret to an Equal Marriage? Ask for What You Need.

Sharon Meers, the author of 'Getting to 50/50,' wasn’t so sure her future husband was ready to lean in to an equal relationship. So she wrote him a list of exactly what she needed.

Our first official date would have made great reality TV. He invited me to a neighborhood sushi spot and said he'd pick me up. But I'd had California rolls for lunch, so I made a reservation at the Italian restaurant inside. It sounded more romantic anyway.

Steve arrived on foot. He was a little surprised that I’d moved our date, but he gamely jumped in my car.

We sat down, and the waiter handed me the wine list. Me! Never before and never since have I dined with a man and been treated as the wine authority. I was delighted and laughed. Steve laughed too, but faintly.

The conversation began a downward spiral. The recent election (Me: Clinton; Steve: Dole). Books (Me: Virginia Wolfe A Room of One's Own; Steve: Larry McMurtry cowboy novels). And then he said: "I think women should stay home for a few years when they have kids."

There was an awkward silence, and I tried to understand how he thought this was an appropriate thing to say to a woman who'd spent seven years climbing the ladder at Goldman Sachs. My job grew more rewarding the more senior I got – why would I want to leave? I'd seen plenty of women with tougher jobs be wonderful moms.

And so it went. I dropped Steve home pretty sure this first date would be the last.

But he kept calling! A movie, a hike, a holiday musical. And I kept saying yes. Steve was charming, fun, and a fine sparring partner. He assured me his views weren't all so different from mine.

But as much as I wanted to trust him, I worried that if we ended up together, he would not support my career. So I kept asking questions  – lots of them, every date. Do you really think women should stay home? Do you want your wife to be financially dependent on you? When a woman focuses on a man's paycheck  – is that a good thing?

By week six, Steve was getting tired of my inquisition  – and so he made a proposal. "Write it down," he said. "Tell me what you'd need to believe about me to be happy. Then I can tell you if I can do it." He's a real estate developer; a deal guy. Deal guys like deal points.

And so I gave him four, typed up and printed out on a piece of computer paper. They went like this:

• After childbirth and breast-feeding, why should the roles of moms and dads be different? Would he be happy to share child-rearing 50/50?

• What had he wanted from his parents? What of himself did he want to give his kids?

• What did he see when he looked at other couples – could he imagine being happy walking in the woman's shoes? If not, why not?

• What about glory – how much professional success did he want? Did he think I would want any less?

Steve mulled it over – for a month. I went to India with my siblings and came back to the most beautiful letter I'd ever read. "I'm not sure I totally agree," he wrote. "But I'm willing to try because I love you." 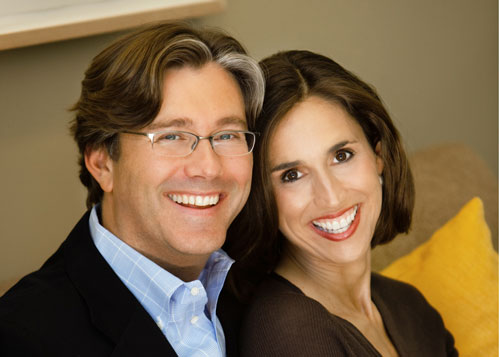 Sharon Meers and her husband, Steve[/caption]

Fifteen years, two kids, and many twists and turns later, I'm so grateful for that leap of faith. I realize, of course, that socially awkward dates aren't everyone's idea of a good time. But I believe that men will join you in conversations like these  – and it makes it far easier for women to have great careers and for men to be great parents. Taking on taboos can actually be fun  – and it's the way to build the kind of partnerships where men and women get (more of) what they want. We need to make these conversations as normal as talking about the last episode of Breaking Bad.

I know this may sound like a stretch. But when they see the data, guys see how 50/50 is good for them  – and they are ready for this.

Social science says women overestimate how much a man cares about his job, men underestimate how much a woman cares about hers and everyone misses out. In the US, a minority of men want to stick with traditional gender roles. 77 percent of men poll "neutral" to "strongly disagree" with the statement "A man's job is to earn money; a woman's job is to look after the home and the family." In fact, 72 percent of people under 30 believe dual-career family  – where both men and women take care of household children  – "is a more satisfying way of life" according to Pew Research Center.

When men are open-minded and women feel empowered to say what they want, that's when fairness has a chance. In my experience, most guys want to share the way they see the world  – and sometimes just voicing how they feel helps men imagine new possibilities.

The reality is that you'll only know what he believes if you take the time to ask. (As my father, a psychoanalyst, might say, "Let guys talk. They'll tell you everything you need to know.")

Whether your job pays a lot or a little, what’s key is saying out loud that it matters to you. Having meaningful work  – that builds your skills, gets you excited and can feed a family if you want one  – is equally important for women and men.

As women, we just need to say that more often – and say it to our dates.