The world is not gender-equal, but college is strong preparation for making it so, writes Smith College President Kathleen McCartney. Her advice to female students: take risks. 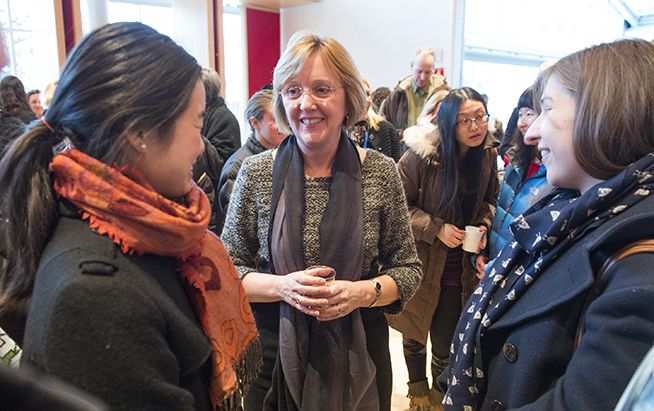 I have multiple college degrees. I lead a college. I have sent two daughters to college. But the advice I give young women about education is advice drawn from life.

To see with clear eyes is to recognize that, even today, our choices are conscribed by our culture. Unfortunately, ours is a culture that markets a girls t-shirt emblazoned with “My Best Subjects,” listing four items, three of them with check marks: shopping, music and dancing. Underneath the unchecked “math” listing it reads— “Well, nobody’s perfect.”

Look harder and you’ll spot subtler examples: the teacher who calls on men more often than women; classmates who refer to assertive female students as “bossy”—a term almost exclusively ascribed to women, advisers who sponsor male students for advanced opportunities even when female students are equally or better prepared.

See this with clear eyes. But don’t let what you see make you lean away.

The social psychologist Claude Steele has written about the ways we internalize stereotypes about ourselves – as female, as lesbian or gay, as members of a certain class or ethnic group, and so on – and how doing so can conspire to limit our life choices. He writes, “We don’t like to think that conditions tied to our social identities have much to say in our lives, especially if you don’t want them to.” But they do.

We have to see the stereotypes before we can move past them. We think we can overcome anything, including sexism—and we can—but first we have to be able to identify it.

Several years ago, I served on a search committee to fill a professional position. We interviewed about a dozen candidates, two of whom were women. At the end of the day, a committee member asked the group whether we thought we had used different terms to describe the candidates based on gender. She reminded us that we referred to one woman as  “timid” and the other as “insecure.” I have never forgotten that moment.

What I like best about leading Smith, a women’s college, is that from its founding it has embraced a collective belief about the importance of gender equality for the world. At Smith, it’s a given that women can lead, because the evidence is clear: every student organization is led by a woman. Our graduates are leaders in every field. The world is not gender-equal, but four years in a place that takes you seriously is strong preparation for making it so.

I was a strong student when I entered college. I was good at “doing school.” But my sophomore year at Tufts University helped me discover my passion. Taking my first class in child development, I was fascinated by the experiments psychologists designed to infer how children learn. Homework for that course felt like play. Despite my reticence (a quality reinforced by my identity as a first-generation college student) I found the strength to seek out my professor during her office hours to volunteer in her research lab. This experience led to graduate school, which led to a career as a professor, which led to the job I have today. I took a risk—for me, a big risk—and it paid off.

Today I think about risks in the same way as I would my research. A risk, I tell myself, isn’t about success or failure—it’s an experiment, a chance to test an idea, a chance to try. College will offer many of these. Don’t lean back. If a new venture isn’t right for you, you can walk away. If it is right, you will have found a passion. Lean into that passion with all your heart.

The French writer and social activist Émile Zola wrote, “If you ask me what I came to do in this world . . . I will answer you. I am here to live out loud.” Our culture, our schools, our own inner voices still seek to restrict women’s ability to take chances, make bold decisions and define their own lives. Don’t listen. See clearly. Take risks. Make college the moment you begin living out loud.