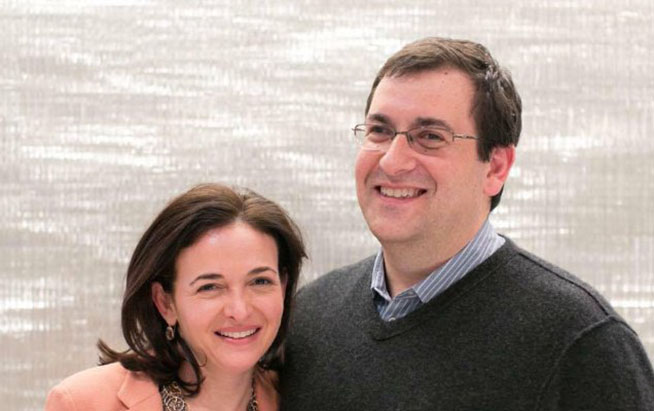 Most of us are lucky if we have even one great passion in our lives. Dave Goldberg had many more: his wife Sheryl Sandberg, his children, his friends and colleagues, music, poker, and the Minnesota Vikings.

On Dave’s birthday last fall, a group of friends joined him at his home to watch the Vikings play the Packers. Dave did something that caught me off guard. At the time, it seemed small. But now it speaks profoundly to one of the many ways that Dave was larger than life.

The game got off to an ugly start. In the first ten minutes, the Vikings were down 14-0. A typical fan would scream at the coach, start hurling objects at the TV, or give up on the game. But Dave stuck by his team. By halftime, the Vikings were losing 28-0. Dave didn’t budge; he kept rooting for them. In the third quarter, they were down 42-0. By this point, I wasn’t even watching the game. I was watching Dave in awe—because every time the Packers scored, he cheered louder for the Vikings. The further behind his team fell, the more he stood up for them. Even after losing 42-10, Dave still loved his team.

That’s who Dave Goldberg was. When your chips were down, he doubled down. As Sheryl expressed it Tuesday in the single most beautiful speech I’ve ever heard, “Dave was my rock.”

Dave was the CEO of SurveyMonkey, and he hosted me to speak there a year ago. When he gave the introduction, I was so embarrassed by his kind words that I could hardly speak. I knew I didn’t deserve his praise, but I wanted to earn a fraction of it.

Among the hundreds of talks I gave that year, it was the most extraordinary audience I had. Just as Dave did with everyone he met, the SurveyMonkey team instantly made me feel accepted. They listened more intently, and laughed more loudly, than any group I had addressed. I was so astonished by their generosity and curiosity that I hung around afterward, hounding various employees to find out how they had created such a positive culture. Over and over, I heard the same thing: the secret ingredient was Dave.

It was clear that Dave made a concerted effort to recruit people who cared about others, who loved to learn and have fun. But his team stressed something far more meaningful: Dave built that culture by example. His helpfulness, inquisitiveness, and joy were contagious. His employees wanted to be like him.

Great leaders build things that outlast them. Inspired by Dave’s example, SurveyMonkey will continue to thrive. This week, the teams worked late to finish projects that mattered most to Dave, and used the hashtag #makedaveproud.

When leaders are admired, it’s usually for what they do for the company. But Dave’s team admired him for what he did for them. Dave saw and brought out the best in others.

His goodness moved us even more than his greatness.

I’ve spent a dozen years studying generosity, and there is no one who embodied it like Dave. Touching tributes have extolled him as a loving father and husband, the heart and soul of Silicon Valley, a lifelong advocate for women, best friend to many, a compassionate leader, and a gracious and generous connector who was bright, kind, humble, and universally admired and liked.

Like his wife, her parents, and his own parents, Dave lived his life in service of others. He was an advocate for SurveyMonkey Contribute, which has donated over $5 million to charity in exchange for people taking surveys. He was a dedicated benefactor of a wide range of important causes, particularly in education and healthcare. But he rarely spoke about his philanthropic work.

“David Goldberg embodied the definition of a real leader—someone who was always looking for ways to empower others,” President Obama wrote. “He was generous and kind with everybody, and cared less about the limelight than making sure that the people he worked with and loved succeeded in whatever they did.”

Dave was quiet about his contributions because he was modest, but also because he genuinely took more joy in the success of others than his own. His startup was streaming music online before most people had even heard of the internet, but he didn’t talk about that. He grew SurveyMonkey from 12 employees to 500, building it into a billion-dollar company, but he didn’t talk about that. As he wisely noted last year, his best advice for leaders was to “Stop talking. Ask and listen.”

A little over a month ago, I saw Dave for the last time. As always, there was no handshake; he greeted me with a teddy bear hug. When I asked him what was new in his life, he immediately said the highlight was the Lean In Together campaign. He beamed with pride at the prospect of fathers becoming more involved with their children, husbands becoming 50-50 partners, and men becoming more supportive of women at work.

Dave was Sheryl’s biggest fan, and he cheered for her even more passionately than the Vikings. When she was writing Lean In, she didn’t want to put her picture on the cover or share her personal stories. She wanted the book to be about progress for women, not about her. Dave knew the movement needed a champion: it needed a human face and voice. He encouraged her to lean in.

Queen Elizabeth II said that grief is the price we pay for love, and for Dave, the grief is immeasurable. My heart is aching for Sheryl and their children. It is also hurting deeply for the world.

I don’t believe this happened for a reason, but it has given us all a reason to be more present parents, more loving spouses, more supportive friends, and more caring leaders. The overwhelming sentiment from everyone who knew Dave is that he inspired us to be better human beings. And he had that effect on us throughout his life, long before we lost him. “Things will never be the same,” Sheryl said, “but the world is better for the years my beloved husband lived.”

There is little that can bring solace in this time, but there is one memory of Dave that I will cherish forever. In the spirit of candor, Sheryl is not the world’s biggest football fan. But on his last birthday, when Dave walked in the door, she and the kids were decked out in Vikings jerseys.

Dave broke out in the biggest grin imaginable, and I have never seen a person happier. He loved his family with all his heart, and he knew they loved him the same way.

For those who have inquired about how to honor Dave's memory, his mother Paula has spent her life helping children with disabilities. For the past four decades, she has run the PACER Center, which exists to enhance the quality of life for children and youth with disabilities, and their families. Donations can be sent to the David B. Goldberg Endowment, c/o Pacer Center, 8161 Normandale Blvd., Bloomington, MN, 55437.