They were one of the most legendary teams in women's sports history -- and are now the subject of a new ESPN documentary. We sat down with soccer greats Mia Hamm, Julie Foudy & Brandi Chastain to talk women, sports and how the two are intertwined to make great leaders. 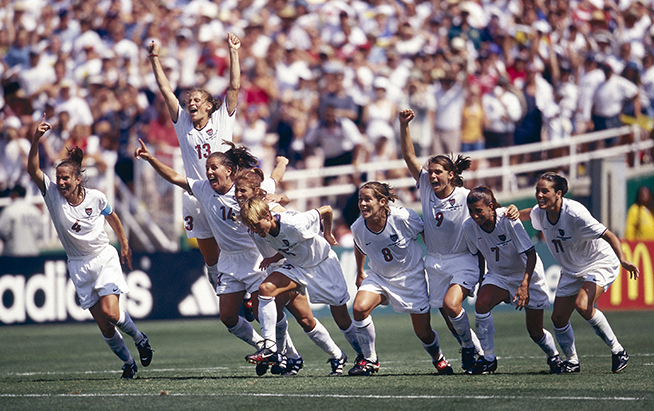 They were called pioneers: the first group of female athletes to fill major stadiums, inspiring a generation of young women to become mini-Mias on the field. Sure, the women of the 1999 U.S. Soccer Team -- led by goal-scoring powerhouse Mia Hamm -- had won a World Cup match before (in 1991). But hardly anybody had noticed. When they returned home that year, trophy in hand, there were three fans waiting at the airport to greet them.

But 1999 was different. Soccer mania had swept the nation, and the women were suddenly front page news. The mission of the competition that year, the World Cup president announced, was to "stage a breakthrough" for women's sports. In short: the women had the future of thousands of aspiring young female athletes on its shoulders.

Around that time, Julie Foudy, the team's co-captain, decided to take out a camera -- in what would ultimately become the basis for a new ESPN documentary, The 99ers. Day after day, she documented her 19 teammates as they traveled, ate, practiced, won, goofed off, and trained -- ultimately ending up at the Rose Bowl, where the women would defeat China for the World Cup title to a sellout crowd. It was there that Brandi Chastain would take the winning penalty-kick shot -- then tear off her shirt to reveal a black sports bra, in what would become the most memorable image from that era. It would later grace the covers of Sports Illustrated and Newsweek, under the headline, GIRL POWER.

We sat down with Hamm, Chastain and Foudy -- the producer of The 99ers -- to talk women, sports, and how the two are intertwined to make great leaders. Excerpts:

A lot of people forget that you guys actually won the World Cup in 1991 as well. But in 1999, you were icons. There was so much pressure on you to fill stadiums and to really do this for all women and girls. What was that like?

Mia Hamm: I think we embraced it. I mean, it was exciting. I can still remember on our way to practice, our press secretary would yell out, “80 percent sold out!” and “85! 90!"  I think our warm up runs across the field at Giants Stadium was the fastest I’ve ever ran. Your heart’s just beating, tears are welling up in your eyes, you're going, “I can’t believe this is happening." And it’s happening here.

No women's team had ever sold out a stadium like the Rose Bowl. Were you worried you wouldn't fill the seats?

Julie Foudy: Oh yeah, we were scared. People wanted us to keep it on the East Coast, keep it small, play it safe. And all along we were like, “We want to do it big.” But we really didn’t know. We literally had a reporter six months at the draw before the ’99 World Cup say, “This is an embarrassment, you’re lying about ticket sales.” And, you know, we’re sitting up there smiling as we’re sweating and we basically said, “We think differently. We think people will come, we think it will be a big success." And the uncertainty of that is what was so neat. Because it was like, “So what? What’s the worst that can happen?! We’re going to do this."

Brandi Chastain: We had this little saying -- "Act as if" -- and I think that really applied in that situation. We did want this big tournament, and we wanted it to go well, and not just for us but for the future of all of women’s sport. So we would just act as if it was going to happen.

It ended up being the most watched game in women's soccer history -- to date. Little girls everywhere looked up to you. Women still look up to you.

Foudy: I think that, really, is what I am most proud of, [that we could inspire others]. The “I can be that lawyer” or “I can be that doctor" -- “I can be that person I want to dream about” and no longer a question of if but when.

Have things changed for women athletes? Have we achieved parity?

Foudy: I think as an athlete you want to leave the sport in a better place and I feel confident that it is. When you see the support of an Abby Wambach or Alex Morgan -- and a kid that’s going crazy similar to what they did for Mia and for Brandi -- that energy and passion just makes me grin from ear to ear.

Because you didn’t really have role models.

You’ve said that part of the power of The 99ers was that it was about the “we,” not the “me." Describe what that was like.

Foudy: You never felt alone, and it’s powerful when you can bring a group together like that and believe in something together. It’s what I love about sports, it’s what I love about team sports. And it’s not a coincidence, I think, that our most successful teams -- '99 being one of them -- happened when we would get that camaraderie together.

There have been a number of studies looking at the connection between sports and leadership -- and it turns out that the higher you go up the corporate ladder, the more likely you are to find women who played sports. What is it about sports that makes good leaders?

Chastain: I think ultimately there’s strength in numbers. I scored an own goal in the World Cup in a quarter-final game when -- if you lose that game -- you go home. And [what] happened right afterwards was, “Don’t worry, you’re going to help us win this game. Don’t even think about it.” That instant, that could have been the worst moment of my life, turned into the best moment. Because I thought, "Alright, I can do this." So I think just competing and pushing yourself is valuable. but you need to know that sometimes it will get uncomfortable, sometimes you will make mistakes, sometimes you don’t have all the answers -- and it’s good to lean on someone.

It’s interesting because sports it one of the only areas where it’s perceived as OK for women to be aggressive.

Chastain: It is? I’m aggressive every day.

Sure, but in the film you you talk about Michelle, one of your teammates, as a "warrior." If Michelle were in the boardroom, she'd probably be called a bitch.

Chastain: I think we have to stop worrying about what other people think. Are you bitchy because you have a strong voice? Or are you too aggressive? Or bossy. Be in control, do the things that are expected, and then some. I think that’s a lesson.

Foudy: I think women are sometimes so afraid to be competitive overtly or competitive in such a discrete way that it becomes unhealthy. And there was a real openness about it [on the team]. That was the first thing sports taught me, like, "Kick the crap out of her -- it’s expected." You’re going to beat each other up on the field, and afterwards hug and be okay with it.

Brandi, it's hard to talk about the 99ers without talking about that moment where you ripped off your shirt. Do you get tired of being asked about that?

Chastain: Well, I think the reason why it was such a popular topic -- besides it being such a great event and amazing -- is because nobody ever saw a celebration like that. So I think they were just caught off guard. It was not planned.

Hamm: I didn’t even notice. I just saw [the ball] go in and I started sprinting. But I know we all get asked, "Are you the one?” No, but if I had her stomach I’d just walk around without a shirt, just all the time.