Gender Bias and the Fight for Equal Pay 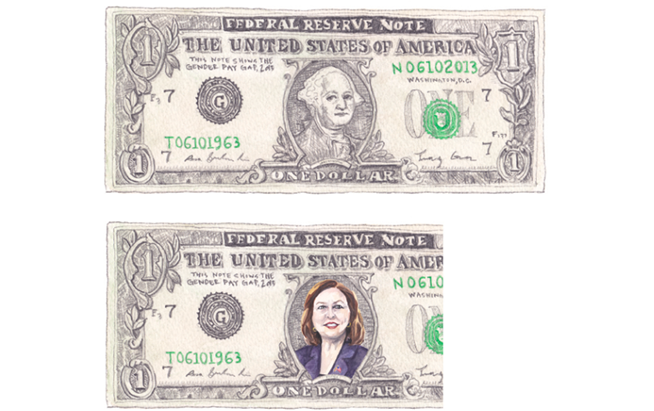 For every dollar earned by a white man in America, a white woman earns 77 cents, a black woman earns 69 cents, and a Latina woman earns 57 cents. Infographic by Emily Nemens for LeanIn.Org.

In 1947, Anita Summers, the mother of my longtime mentor Larry Summers, was hired as an economist by the Standard Oil Company. When she accepted the job, her new boss said to her, “I am so glad to have you. I figure I am getting the same brains for less money.” Her reaction to this was not to get upset. Instead, she felt flattered. It was a huge compliment to be told that she had the same brains as a man. It would have been unthinkable for her to demand the same pay.

Fifty years after passage of the Equal Pay Act, much has changed. Yet the gender wage gap persists. In every industry and every country in the world, women continue to be paid less than men for the same work. Even in the U.S., a recent study found that when faculty evaluated identical lab manager applications, the one with a man’s name on it received a higher starting salary.

There are many reasons why women receive lower pay, but gender stereotypes about competence and appropriate behavior are two factors that stand in women’s way. Studies find that men are considered to be more competent than women, especially in domains traditionally seen as “masculine.” We see these beliefs reflected in men and women’s assessments of their own capabilities: Men tend to overestimate how they will perform and women tend to underestimate how they will perform.

This same social pattern influences salary expectations. A 2011 survey showed that long before they even hit the workforce, teenage girls expect lower starting pay than teenage boys. And this trend continues throughout college where a 2010 study revealed that women’s expected peak-pay expectations were 33 percent lower than men’s.

Another stereotype that undermines fair pay for women is the expectation that women are communal – that they are warm, concerned with others (not money), and not focused on themselves. Some people put the fault on women for not negotiating more aggressively. But instead of blaming women, we need to recognize that women do not always advocate for fairer pay because it can backfire when they do. In fact, studies have found that when women negotiate on their own behalf they are often seen as aggressive and employers are less enthusiastic about working with them. That’s a tough way to start a new job.

To close the gender wage gap, we need to have an open and honest conversation about the biases that suppress women’s pay. The good news is that there are strategies that women can use (such as using communal language—“we” vs. “I”) that will increase the chances of negotiating successfully. People will still like them and want to work with them.

This article first appeared on the website for the Council on Contemporary Families, as part of a symposium to discuss the Equal Pay Act.