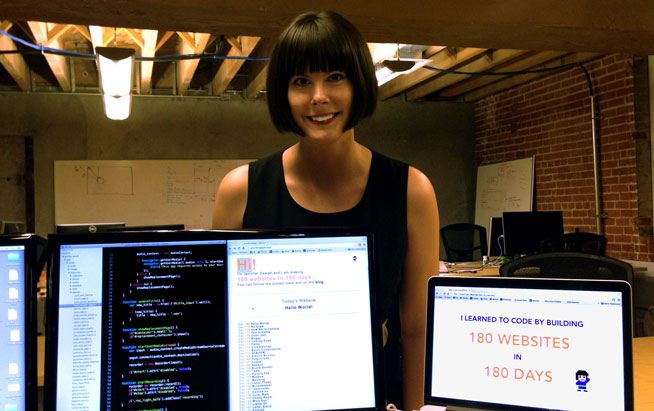 I was never big on New Year’s resolutions, until I had a serious goal: 2013 was going to be the year I finally learned to code. And despite having no technical background, I decided to take the JFDI approach (just f--king do it). I was going to build 180 websites in 180 days.

My background is in fine art. I was drawn to art because it provides a platform for exploring how people communicate and interact. In the past, I used sculptures and drawings to explore interpersonal communication, but soon I began thinking about technology. I’ve always been kind of obsessed with how cool it is to be able to communicate through the internet, and I realized no drawing could capture that power. I wanted to get in there and build those communication channels myself.

The question, of course, was how. There are plenty of courses to take or boot camps to join, but none really appealed to me. I decided a self-directed project would be the best way to stay motivated and learn quickly. So I set out a few simple rules:

It was scary to have all of my mistakes out in the open--but if you want to learn to code, you’re going to make a lot of mistakes. Putting everything out in public helped me get over my fear of being wrong. I pieced together a few bits of code and made the website for day 1, the homepage for the project. The next day I did a little more, and the following day a little more.

Getting over that fear of being wrong was important, and one of the first things I learned was that I am my own harshest critic. In the beginning, I put a ton of pressure on myself to be perfect. I was concerned with getting every detail right and I felt like a total failure if the day’s website didn’t turn out the way I had hoped. It was driving me insane. Learning is messy and throughout the project I continually had to remind myself that "not perfect" does not equal "failure."

Some days were unimaginably frustrating. I could work on a website all day only to realize it was totally broken and I’d have to scramble to slap something together at the last minute. Other days I felt like I was kicking butt and telling the computer what for. Whichever it was, having something concrete to point to at the end of the day to say "I made this" was  motivating. Even if the site wasn’t perfect, I had accomplished something.

I put the finishing touches on my final website on Sept. 27--and it’s humbling to see how far I’ve come. I still have a lot to learn about programming, but I am excited to continue my life as a coder--and share my code with the world.